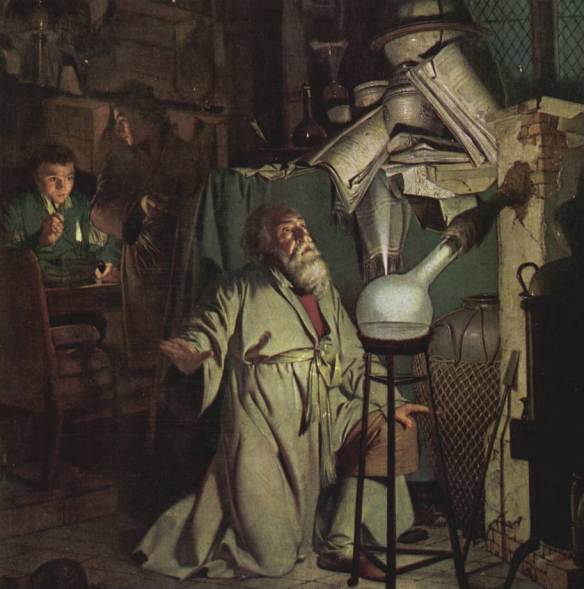 Materialism is now the de rigueur assumption underlying any public discussion of the sciences, especially the life sciences thanks to the neo-Darwinist domination of that field.  This is despite the fact that “material monism”, as my old philosophy professor liked to call it – the belief that only matter exists and is real, is falling increasingly out of favor among the “hardest” of the “hard sciences”, like physics.   This popularity has become so widespread that it is becoming increasingly difficult for the reasonably educated layman to imagine a world outside of materialism.

For many raised in oppressive religious environments, generally monotheist (more on this later), materialism appears as a great liberation from the perverse and abusive conception of the “spiritual realm” with which they were raised.   The West, collectively, has been laboring under this burden for the last several hundred years, and the “modern liberation” has meant, for many, nothing more than throwing off the shroud of any kind of ideology contradictory to the simplest possible materialist reduction. Sadly, along with this “progress” to a world denuded of any spiritual or transcendent influence has come an ever increasing nihilism.  This is not to say that nihilism is a phenomenon limited to materialism.  Nihilism, as a genuine crisis facing the West, is not dependent on materialism as we know it, but rather it is the reverse.  Modern materialism merely sets the stage for nihilism, of which it is but one emergent phenomenon.

It should first be noted that concern with the desire to possess “things”, while colloquially referred to as “materialism”, is not what is meant by the term in this essay, nor the belief in an objective reality of some-sort, more or less correctly perceived by our physical senses.  Neither vitalism, nor substance dualism (to name but two alternatives to materialism) deny the existence of physical objects.  Rather materialism, strictly speaking, is the belief that all phenomenon may be ultimately reduced to the interactions of a spatially extended, highly differentiated, substance, which is itself un-perceiving and exists independent of any observer.   All higher order functions, such as life itself or mental activity, are explained as merely complex “epiphenomenon” of material interactions.

Generally the arguments in favor of materialism fall into three categories.  First, the argument for technical efficacy.   Second, the argument for philosophical sufficiency.  Third, the argument for experimental validity.  I will attempt, as much as is possible in this short essay, to address each of these in turn.  While an in-depth deconstruction and the subsequent construction of an alternative baseline conception of the universe lies outside the scope of this blog, I hope to be able to point the reader in the direction of the “cracks in the armor” of the modern materialist world view.  It will be up to you to apply “hammer and tongs” to the gap indicated.

The argument for technical efficiency rests on the assumption that all modern technical production depends on a materialist ontology; either directly, in the sense of it being impossible to conceive of or construct a highly complex object – such as a cellular phone and its attendant network, or perform a highly delicate task, such a brain surgery, without assuming a materialist philosophical starting point; or indirectly, in the sense of materialism being a required historical pre-requisite for the highly specialized technical knowledge which makes the modern world possible.  The first version of this assumption is easy enough to dismiss.  It is simply untrue as a brute fact.  Many highly skilled technical workers, and scientific professionals, have beliefs that lie outside the scope of material monism, and this group includes some of the most prestigious scientists in the history of Western culture.  Much is often made of the fact that modern scientists are, as a group, less “religious” than the general public (as the term is commonly understood, meaning belief in the Abrahamic monotheistic god).  It is, however, not necessary for all scientists to reject material monism, only for some to reject it and still be able to produce as scientists in order to disprove this version of the argument for technical efficiency.

The implied version is slightly more sophisticated.  It recognizes that scientists are not always material monists, either in the modern world or historically, but argues for an “evolutionary” progression of thought which exists as a “substratum” to technical progress. The fact that almost every single pivotal scientific discovery or theory has been made previous to the modern age, and that the majority of scientists – like the majority of people – in ages past were not materialists, does not generally dissuade adherents of this view .  In order for thought to be “evolutionary”, in this sense of progressing independent of any individual human mind, ideas themselves must be imbued with “intentionality” and purposeful behavior.  This is the concept of the “meme”, or “mental gene” invented by neo-Darwinian Richard Dawkins.  It rests upon the assumption that genes have intentionality – itself an unproven and problematic hypothesis, and that ideas likewise posses similar properties.  How, exactly, a non-physical, non-material epiphenomenon could self-direct is entirely unexplained.  This is because rather than being a legitimate theory derived from observation, hypothesis and the accumulation of supporting evidence (as materialists tell us is the only legitimate way of knowing) this “theory” is an attempt to get around or dodge the limitations of materialism by appealing to metaphorical description, in the hope that the metaphor itself will not be analyzed by the person hearing it.  Upon analysis, without an implied appeal to some kind of transcendent reality beyond purely random material interactions the theory falls apart.  This argument rests on many a-priori assumptions which are not, themselves, arrived at scientifically.  This hypocrisy is itself enough to cast serious doubts on this claim.

The second argument in favor of materialism is philosophical sufficiency.  This is the claim that not only does materialism adequately explain existence, it does so in the simplest, most comprehensible way, with the fewest number of entities.  The first major problem here is the experience of consciousness itself, which in no way resembles the “robot like” function that materialist reduction would suggest.  While we can interfere with the physical structure of the brain and produce effects, we are no where near a complete understanding of consciousness.  Many modern neuro-scientists, like  Dr. Mario Beauregard, are beginning to doubt the materialist explanation for consciousness.  If consciousness itself cannot be explained by materialism it fails as a philosophically sufficient ideology, although it may still be adopted provisionally for certain purely technical and mechanical applications.   The second major problem is the question of just what matter actually consist of in-and-of itself.  The originator of materialism, Democritus, conceived of the “atom” as the smallest possible unit of reality.  The atom has since been broken open and even the various sub-atomic particles are now in the process of being dissected and examined.  What lies beneath the sub-atomic level is an open question at present but the most popular theory is “super-string” theory, which at this point is entirely a mathematical abstraction and requires the existence of several unknown “dimensions” not presently knowable by any human mind.  So much for the fewest number of entities.  The Bishop Berkeley first laid out the problem of matter’s ultimate nature in his “Three Essays”.  While the reader might not find his solution convincing, it is certainly much simpler than string theory, and his laying out of the problems inherent in the materialist reduction are, in this author’s humble opinion, difficult to refute.   Regardless of whether or not materialism is valid it must be admitted that it is certainly not, at the present time, philosophically sufficient by itself.  There are simply too many open questions.  One could certainly hold the opinion that one day these fundamental questions will be answered by materialism, but what is this confidence based on except faith and a hope or belief held to without evidence?

Finally we come to the question of experimental validity.  This argument is somewhat unusual in that it is based on a supposed lack of evidence.  It claims that, regardless of one’s personal beliefs, or the demands of philosophical consistency, there is no evidence in favor of the validity of any other interpretation of reality.  Generally speaking those making this argument have not gone out of their way to examine experimental evidence which argues against materialism.  A recounting of this evidence lies outside the scope of this blog, but interested parties should read the work of Mr. Rupert Sheldrake, especially his recent “Science Set Free”, which investigates ten materialist claims from a scientific, experimental, evidence based perspective.  Whether or not one accepts Mr. Sheldrakes conclusions, or even likes him as a person, one must admit that the claim of “no evidence” is shocking.  Counter-indicative evidence is a regular feature of scientific research.  What that evidence signifies is a matter of interpretation, and here we come to the primary problem with materialism, which is that it is not primarily a matter of the natural sciences but of philosophy.  Most of the natural sciences function perfectly well without appeal to the ultimate questions of existence, and this is doubly so for the knowledge workers which we depend on to make modern life possible.  Doctors don’t work on an atomic level, but on the level of living systems.  Computer programmers don’t directly affect quarks but rather the logical and aesthetic arrangement of information.   The fossil record exists whether or not it is purely a construct of minds, or living spirits, or material substances.

The fundamental problem here is that we, as human beings, hunger for an understanding of our condition.  At one time this answer was provided by religion.  Earlier I mentioned that many modern materialists are particularly concerned with the abuses of religion, and by religion commonly mean monotheism.  The dominant religion in the West for the last thousand odd years has been Christianity, which makes exclusive truth claims.  The Catholic Church was, at one time, particularly concerned with establishing itself as sole authority over Christianity, and was very concerned with conceptions of the world which questioned the omnipotence and perfection of God.  This lead to the church lending its support to early pioneers of science which conceived of the universe as a giant mechanism which logically and rationally proceeded from the omnipotent will of the deity.   Many competing conceptions were left aside, not because they failed to reflect the observable facts of the universe, but because they argued for a living universe full of entities which were self-directed, or for multiple independent centers of value and meaning.  In time confidence in the Church eroded, and now confidence in Christianity has gone the same route.  While this, of itself, is not to be mourned material monism has been put forward as the best possible replacement for the Christian metaphysic.  Structurally, however, it has done little more than decapitate the Christian ideology, and remove God, but keep the vast organized mechanism of the universe intact.  It remains nothing more than a “holding position”, designed to keep Western culture rolling along for a few more decades.  In this light it is probably worth noting that the rate of scientific innovation has slowed drastically.  Almost all modern “discoveries” are a kind of “tinkering at the margins” and the cost of further innovation has increased.  It seems that we are reaching the point of diminishing returns.    It seems obvious to this writer that we need a new paradigm.  What that shall be remains to be seen, but we cannot pursue a new paradigm without admitting that the old one no longer servers our needs.