A personal exegesis on Cleanthes “Hymn to Zeus”.

Most glorious of the immortals, invoked by many names, ever all-powerful,

The name of Zeus is not the name of a celestial “person”.  It is in fact a title, the etymological equivalent to the Latin “Deus”.  Zeus was often called “God of the gods” and the father of all.   He is not merely one deity among many, but God himself.

Zeus, the First Cause of Nature, who rules all things with Law,

The familiar story of his birth, how his mother Rhea concealed him from his father Cronus, who consumed a stone instead of his holy son, reveals his identity as the active creative force within the universe.  He is that which has conquered time – which time seeks to swallow but cannot hold, and in his power he forces time to vomit up all the other gods into the universe.  Yet creation also occurs within time (Cronus), and the fertile ground (Rhea) of being – hence his titanic parents.  Our God is not some abstract and distant hypothetical “creator”.  He is the force of creation itself. Therefore he is Law, since all things move according to the foundational creative energy.

Hail! It is right for mortals to call upon you.
since from you we have our being, we whose lot it is to be God’s image,
we alone of all mortal creatures that live and move upon the earth.

Since our God is the active force within the world, we reject the so-called “negative theology”, which seeks to discover God through a removal of all “limiting” attributes and images.   Rather, we use all art and artistry as a fitting symbol of God, for those things that remind us of God move us closer to him, through participation with our own divine essence.

Accordingly, I will praise you with my hymn and ever sing of your might.

The whole universe, spinning around the earth,
goes wherever you lead it and is willingly guided by you.

Since all things follow their own first cause and nature, the world is ruled by providence.

So great is the servant which you hold in your invincible hands,
your eternal, two-edged, lightning-forked thunderbolt.
By its strokes all the works of nature came to be established,
and with it you guide the universal Word of Reason which moves through all creation,
mingling with the great sun and the small stars.

The divine thunderbolt steers all things.  The stars are the great regulators of nature. This doctrine is expounded in great detail by Heraclitus.

O God, without you nothing comes to be on earth,
neither in the region of the heavenly poles, nor in the sea,
except what evil men do in their folly.

Although the world is ruled by providence, we posses free-will.  When men misunderstand themselves, and their fellow man, and do evil, that is not the fault of God.  The possibility of error is but the price we pay for independence.

But you know how to make extraordinary things suitable,
and how to bring order forth from chaos; and even that which is unlovely is lovely to you.

Yet even the possibility of error is part of the divine order and beautiful.  No great work of art, no great game or story, is without tension.

For thus you have joined all things, the good with the bad, into one,
so that the eternal Word of all came to be one.

Existence is beautiful.  The world is divine.  We are not cast out of the majesty of God.  We are not alien from ourselves.  Even our most human and ordinary needs are part of the wonder of creation.

This Word, however, evil mortals flee, poor wretches;
though they are desirous of good things for their possession,
they neither see nor listen to God’s universal Law;
and yet, if they obey it intelligently, they would have the good life.

It is a misunderstanding of the nature of the world that leads men to evil.  If they would turn to wisdom, and live in accord with nature, they would have a good life.  Zeus does not “punish” in the human sense.  He is above such pettiness.

But they are senselessly driven to one evil after another:
some are eager for fame, no matter how godlessly it is acquired;
others are set on making money without any orderly principles in their lives;
and others are bent on ease and on the pleasures and delights of the body.

What makes these things evil is not the acts themselves, but misunderstanding them.  Fame earned through great deeds is the definition of nobility.  Wealth gained through orderly principles is harmony with yourself, the laws of nature, and society.  Pleasure is health and well-being of the body.  By themselves these things are indifferent – neither good nor bad, but to be intent on them, to seek to gain them AS IF they were good in themselves, and to sacrifice that which is truly good: godliness, principles, and the well-being of one’s character, that is evil.

They do these foolish things, time and again,
and are swept along, eagerly defeating all they really wish for.

By doing evil you do not harm Zeus, but yourself.  You defeat your own happiness.

O Zeus, giver of all, shrouded in dark clouds and holding the vivid bright lightning,
rescue men from painful ignorance.
Scatter that ignorance far from their hearts.
and deign to rule all things in justice.
so that, honored in this way, we may render honor to you in return,
and sing your deeds unceasingly, as befits mortals;
for there is no greater glory for men
or for gods than to justly praise the universal Word of Reason. 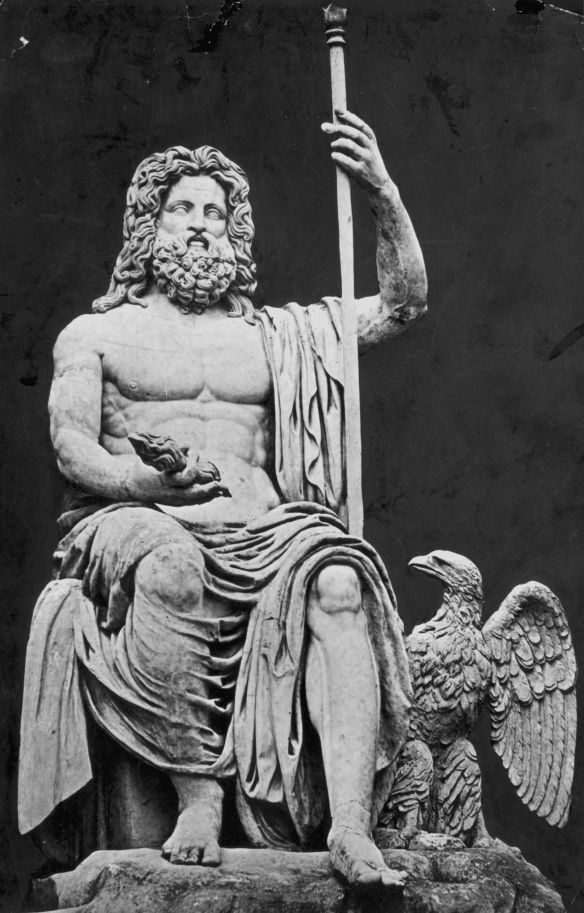 circa 1920: Jupiter, the Italian sky-god connected with rain, storms and thunder, who was identified with the Olympian Father of the gods, Zeus. A Colossal statue found on the shores of Lake Alba Longa. (Photo by Hulton Archive/Getty Images)