In my previous post about my reading of Royce I mentioned that I’m only about half way through the survey text in question, and that I started reading in December. The book is only about four hundred pages and, while it is a dense philosophical text, I usually read much more quickly. So why the lag?

When I was in school I was never really good at studying: taking notes on texts or lectures and reviewing them. I never really learned how to take notes or use them, so I just sort of wrote stuff down as it seemed relevant and then reviewed it before a test or while writing an essay, and this served me pretty well. After I was done with whatever task I had taken the notes for, I would just toss them in the trash. As an adult when studying for technical certifications I made heavy use of note-cards, which I would use for “brute-force” memorization of test “gotcha” questions. Again, what did I do with the cards after passing the test? Into the trash.

Late last year I realized this haphazard approach wasn’t working for me anymore. I’m not studying for school anymore. I’m trying to understand myself and the world around me. Having reached middle age, and spent most of my life reading, I don’t suffer from a lack of material. There’s always more to learn and read, but what I really need now is the ability to correlate, synthesize and understand, not accumulate and regurgitate isolate facts. So I did what I usually do when I want to learn about something. I buy a book.

This book details the notation method of prolific sociologist Niklas Luhmann called the “slip box” or “Zettelkasten” method. It’s an interesting read, but the method itself is simple and can be explained in few minutes.

The main focus of the “Zettelkasten” is the construction of one’s own personal reference system of inter-connected notes. This is the “Slip-case” itself. My understanding is that Nikals Luhmann had a wooden card cabinet. Some people use electronic versions today. You can also buy something appropriate on Amazon or at Office Depot. 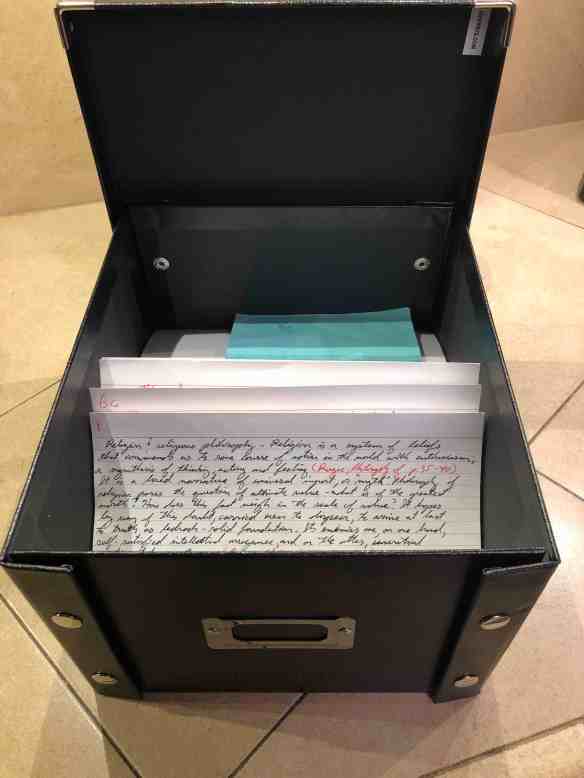 This will serve as your central note repository. The purpose of this is not the same as the old library card catalog. It isn’t for locating texts. It’s for making connections.

As you’re reading a text, or listening to a lecture, you make brief reference notes as normal, taking care to note the source briefly. I like to read a section all the way through first for context, and then re-read it while taking notes, but your mileage may vary. This is the first note set of three. Some people like to save their reference notes (somewhere other than the slip-case) but I think of them as temporary. 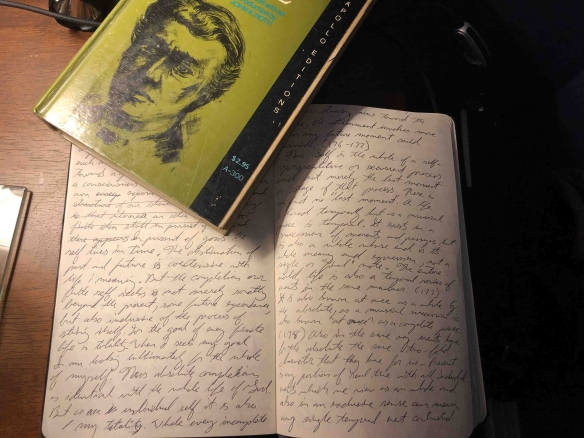 The literary note forms the basis of a permanent note. I use 5 x 8 note cards. I believe Luhmann used half sheets of paper. I find that the transition from literary note to slip case card is much easier than the transition from reference note to literary. My note cards end up being just a slightly edited version of the literary note, with an emphasis on clarity and brevity. The permanent note goes into the slip case. It is important to record the source on the note card for future use. I like to use contrasting color and just use book title and page number. Some people like to make more detailed source references on the back. The permanent notes are numbered and you can also reference other cards by number. 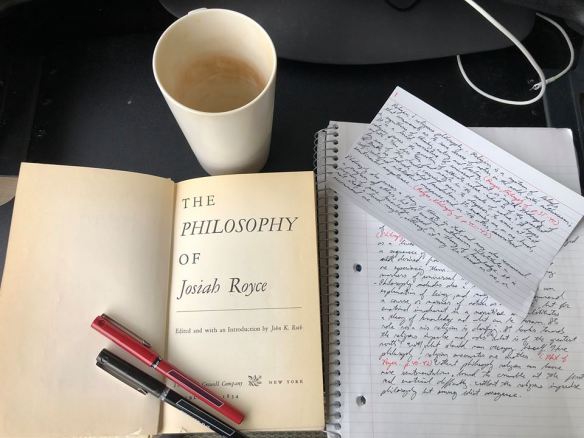 How are they numbered? Sequentially at first, and then intuitively. Initially the cards can be just numbered by the order you write them. The first card will be 1. The second card can be 2. If you feel that a single literary note spans several cards you can use a sub-numbering system. So if the reference notes on a given chapter about… I don’t know… Josiah Royce’s understanding of the self results in a two and a half page literary note, and this in turn results in three permanent 5 by 8 note cards, these could be numbered 6, 6a, and 6b respectively. If you feel that a card really “belongs” in a sequence between two cards you have already filed, you can further divide the sequence. To continue the above example, you can insert other cards on the same topic of “the self”, perhaps from the same reference text and author, or perhaps from a completely different source, in at 6a1, 6a1a, 6a2, 6a2a1b.

At the beginning of the card catalog you can write a brief table of contents. If necessary, each section can also include a shorter table of contents reference card. Feel free to make up your own cross references and organizational systems. The point here is avoid per-determining how subjects and interests will fit together but to allow them evolve naturally over time, encouraging previously unnoticed connections to emerge organically.

As you add notes from multiple sources to the slipcase you will end up not with separate notes but with one complete set of notes relevant to your own personal intellectual journey. If you then feel the need to extrapolate on a given subject you’ll already have your research done for you. Just flip through your slipcase and extract the relevant sections.

Obviously this method takes a long time. Not only are you going through the same material in at least three passes, but you also need to accumulate a fair amount of material in the slipcase, from a variety of sources, before you can expect it to do anything for you. It clearly lends itself to academic and general non-fiction writing. It may be useful for fiction, but I’m not aware of any fiction authors who use it. It’s not for everyone. That said, Luhmann produced over 70 books and 200 scholarly articles using this method.

1 thought on “The Slipcase Method, or “Why I’m reading so slowly.””