My first retro-clone was James Raggi’s excellent and evocative Lamentations of the Flame Princess. 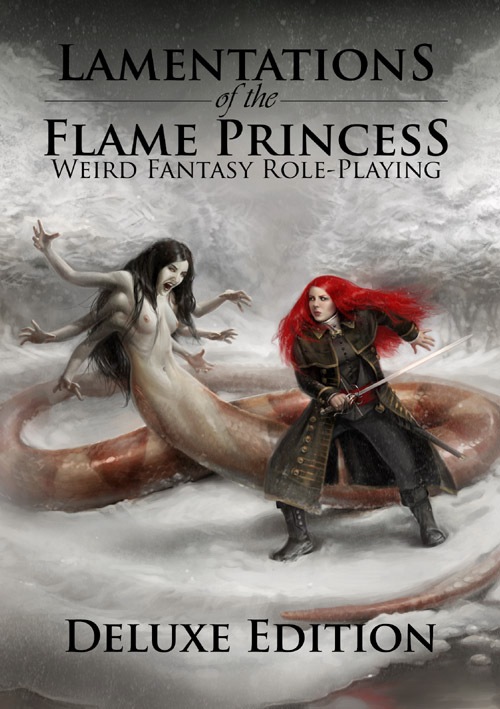 I had been out of the hobby for several years and went through a game book purge in my mid-twenties, when I wanted to be taken “seriously”. Recently I started rebuilding my game library, picking up a copy of the infamous “Red Box” which was, for me as for so many others, a return to my starting place. 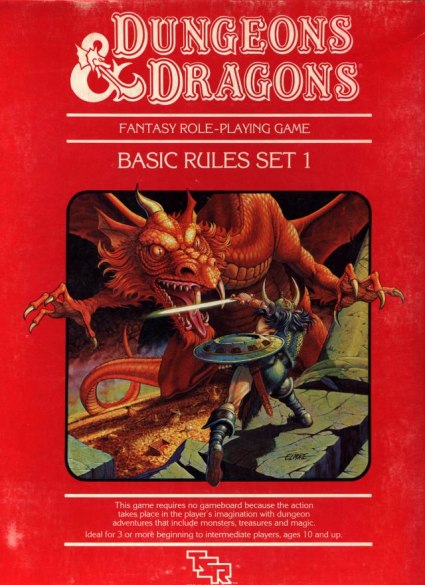 Despite the familiarity of the “Red Box”, I felt that I needed a more “up to date” DMing jump start. I now realize this was incorrect, and the trusty red dragon and barbarian warrior would not have steered me wrong; but I hadn’t quite re-absorbed the old school “use anything as a springboard” mentality at that point and, to be totally honest, I just wanted to buy something shiny. While it may not have been strictly necessary, I don’t regret the decision to start with “Lamentations”. The OSR, I’ve come to realize, is about much more than just using old gaming products. It’s about adaptation, creativity, and making the a game your own. In that respect, I couldn’t have asked for a better introduction.

The old school rules in LotFP were immediately warm, familiar and inviting; as much as the horror and “metal” inspired tone was different and thought provoking. I decided to experiment on some strangers before trying to convince my friends to return to their old, polyhedron haunted, ways. I joined a local meetup group, DnD Melt (http://www.meetup.com/DnDMelt/), which meets at the Meltdown comic book shop in Hollywood, CA.

Meltdown is a kind of geek mecca in the Los Angeles area, hosting live performances, book signings, drawing classes, TV pilots, etc.. etc.. (http://www.meltcomics.com/blog/). Satine and crew were friendly and welcoming, but most of them are younger and have firm 4th edition and Pathfinder loyalties. Despite being the “old man” of the group (I’m 35), I managed to recruit a few hardy adventurers, commandeer a table, and get to rolling. The first thing my new old school players commented on was how quick and effortless character creation was, and how soon we were ready to start actual play. I chuckled and nodded my head sagely at the wonder and wisdom of all things old school, and then jumped right into the adventure, kindly provided by James Raggi with my LotFP boxed set. It went a little like this….

You’ve been traveling along the trade road for several weeks, making your way to “the big city”. Sometime in the late afternoon, on an unseasonably cold summer day, you come upon a group of scruffy looking fellows. You didn’t much care for their looks, but one of them (you can’t quite recall which) suggests banding together to avoid traveling hassles. Trusting to the ancient adage that it’s best to keep your friends close but your enemies closer, you join their not-so-merry band and continue on your way. Around sunset you reach the end of some rolling foothills and espy the warm glowing lights of an building in the valley below; also, there are some boots sticking out of the bushes next to you; also, it has started to rain.

Soaked to the skin, covered in mud to the knees, and dragging a corpse, the PCs arrived at the aforementioned inn just after dark. The innkeeper, after being offered a suitable bribe, agreed to send word in the morning for the local Baron, and advised them to stow the body in the stables. After depositing the body in an empty stall the PCs sampled the local provender and settled in to snore merrily through the night. The dead man, however, had other ideas…

At the risk of giving away too much, this little gem of an adventure has far more atmosphere building, problem solving, and “situational exploration” than it does combat. There was one big fight scene, where the PCs managed to kill a stable full of horses (and most of the other guests) before doing away with the main monster. I included a hook to the next adventure module I planned to plug-in to my setting, but they refused to take the bait and lounged around the inn throughout the next day until the local Baron showed up with his retinue and took the lot of them into his custody. After some brief but vigorous questioning, the baronial wizard burnt the inn to the ground and the PCs were trundled off in chains, likely prisoners forever (or at least until the next session.)
(http://www.youtube.com/watch?v=2s1MspmfEwg)

In my own humble opinion, the game was a success. The pace was fast and light. The players stayed engaged throughout and made positive remarks afterwards, asking if I planned on returning to next week’s meetup to continue “the campaign” . The one exception was a die hard 4th edition player (and DM) who disliked the lack of an extensive rule book he could reference and hack. It’s not my intention to engage in edition wars, but I will remark that it seemed like we got a lot more actual ADVENTURING done than the other groups, all of which were running either 4th edition or Pathfinder. One particular group played a single low level combat for almost FOUR HOURS! Oh well, as long as they were having fun. “Different strokes for different folks”, that’s my motto.

Sadly, DnD Melt canceled their Thursday night meetup and this particular group dissolved, but not before we picked up several more players, ran a classic module ( The Village of Hommlet), recruited a humble woodcutter as a henchman, got said woodcutter eaten by wolves, encountered a small but vicious subterranean race of gremlins, discovered a strange plot afoot in the woods, ruined the strange plot somewhat accidentally, almost breached the dimensional barrier, and raised a few of our number to the high and lofty peaks of level two. Some of this will be detailed in subsequent posts. Some of it is already drifting well south of the hazy shores of memory. This is actually the one real lamentation I have: I need to keep better campaign notes.

Until next time, happy gaming!

( Written March 5th, 2013 and transferred from my soon to be shut down gaming blog. )